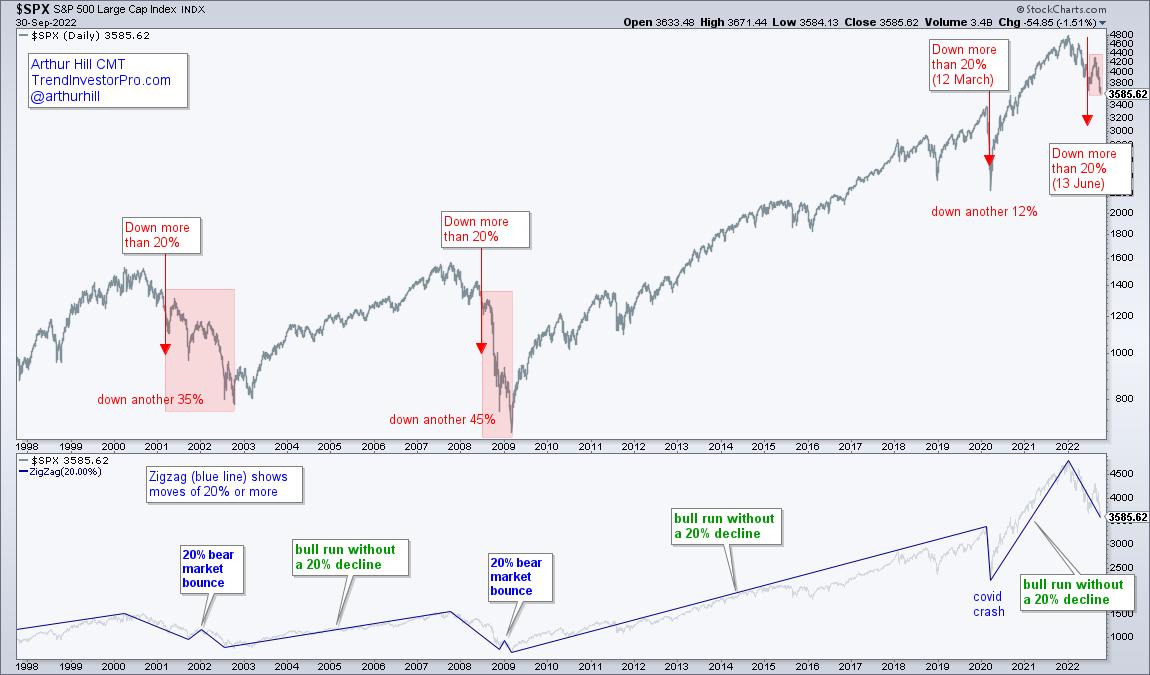 The blue callouts highlight two bear market bounces of at least 20%. These two bounces occurred over a year after the S&P 500 peaked and the index moved to new lows after these bounces. We already witnessed a 17% bear market rally from mid June to mid August. Judging from the last two bear markets, we can expect another counter-trend bounce at some point, but this is unlikely to be the bounce that ends the bear market.

No two bear markets are exactly the same, but we can study the last two bear markets to better understand the dynamics and set expectations going forward. In particular, there are the three phases of a bear market according to Dow Theory. We have also yet to see a capitulation phase that sets up a monster advance that typically signals an end to the bear market. This week I dissected the two bear markets and applied the lessons learned to the current bear market. This detailed report and accompanying video are available to subscribers of TrendInvestorPro. Click here for immediate access.

About the author:
Arthur Hill, CMT, is the Chief Technical Strategist at TrendInvestorPro.com. Focusing predominantly on US equities and ETFs, his systematic approach of identifying trend, finding signals within the trend, and setting key price levels has made him an esteemed market technician. Arthur has written articles for numerous financial publications including Barrons and Stocks & Commodities Magazine. In addition to his Chartered Market Technician (CMT) designation, he holds an MBA from the Cass Business School at City University in London.

It’s the worst September for stocks since 2002. What that means for October.

Nike, Micron, Amylyx and others

Nike, Micron, Amylyx and others

Market Trying to Hammer Out a Bottom | Moxie Indicator Minutes

At the Edge of Chaos: Any Positive Surprise Could Launch a Huge Stock Market Rally | Top Advisors Corner