Don’t Even Think About Buying… (This Sector) | RRG Charts

Staying out of a sector can be as important as being in the right sector. This is particularly true for the Communication Services Sector, and has been for a long time already.

The Relative Rotation Graph above shows the rotation over the last 30 weeks, starting the week of 1/24. Prior to this period, XLC had already traveled deep into the lagging quadrant, underperforming the S&P 500 by a mile. The start of the tail picks up the rotation when the sector had started to pick up some relative momentum, crossing over into the improving quadrant.

As we can see in the chart above, this rotation was short-lived, and the tail has started to roll over back down again and is now on the verge of crossing back into the lagging quadrant.

The table above shows the performance of the sectors over this 30-week period. XLC is at the bottom of the list with a loss of 20.8% over the last 30 weeks. Compare that with the 30.4% gain for the energy sector at the top of the list. That’s a difference in the performance of more than 50%.

Does that mean you could have gained 50% over that period? If you had a “God” strategy (one that picks exactly the right sector at the right time) that shorted XLC and went Long XLE in equal amounts, then Yes. But that would have been a very aggressive trade. Let’s get a bit more realistic here.

Plenty of professional PMs would sign immediately for such a result in 6 months’ time!!

Let’s dive a bit deeper into the Communication Services sector and see if we can get an outlook for the coming weeks.

The rotation on the weekly RRG is very clearly turning back to the lagging quadrant, which suggests that we are about to enter a new leg down in an already existing relative downtrend. 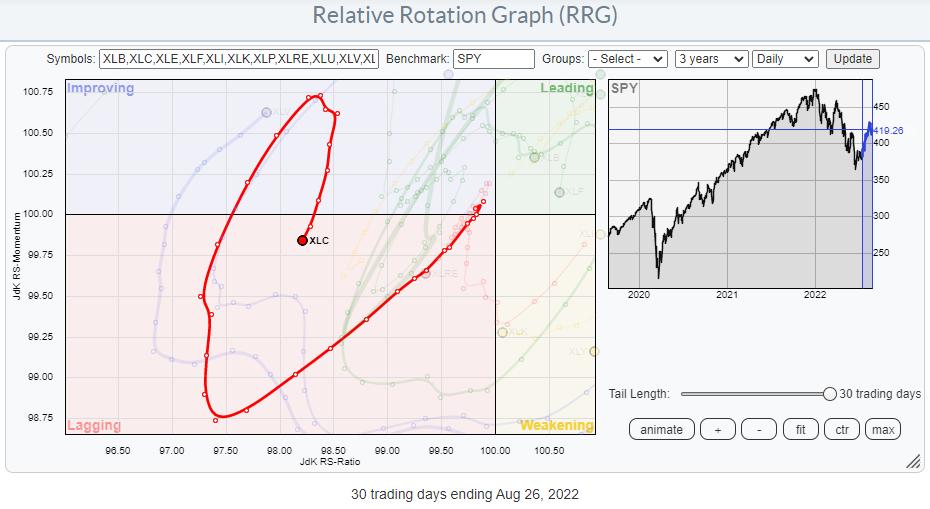 In the daily RRG above, I have highlighted the tail for XLC and, as you can see, it has also turned back down while inside the improving quadrant and has now already hit lagging, leading the way for the weekly tail to follow. This daily rotation is sending the same message as its weekly counterpart. We are embarking on a new leg down within an already falling relative trend.

When both the weekly and the daily RRG are rotating in sync, that usually sends a strong message. 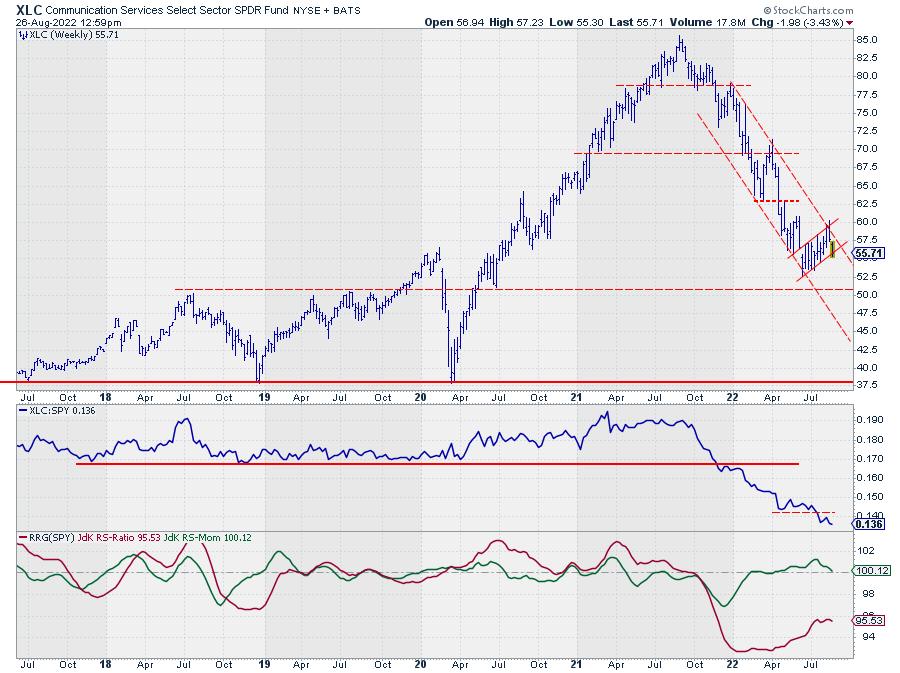 The price chart for XLC confirms that message. The downtrend that started in the middle of last year is still fully intact, showing a very regular series of lower highs and lower lows. The recent improvement ran into resistance at the level of the falling resistance line and is now close to breaking down from that consolidation. Such a move will also help the RS-line to move lower and continue its downtrend by completing a rotation completely on the left-hand side of the RRG for both the weekly and the daily time frames. 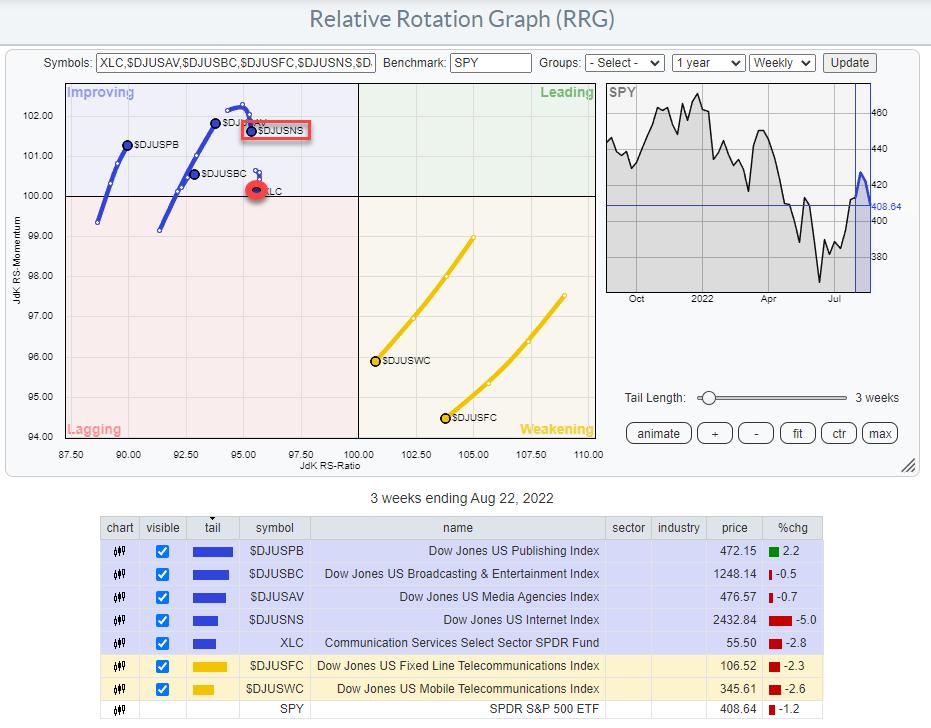 This RRG shows the rotation for the groups inside the Communication Services sector. This is a so called “double benchmark” chart. The center of the chart is $SPX, but you will also find XLC on the chart. This allows you to see the rotation of the groups against the S&P 500, but also against their sector index (XLC) at the same time.

The most important group in this universe is $DJUSNS, the Dow Jones US Internet index. 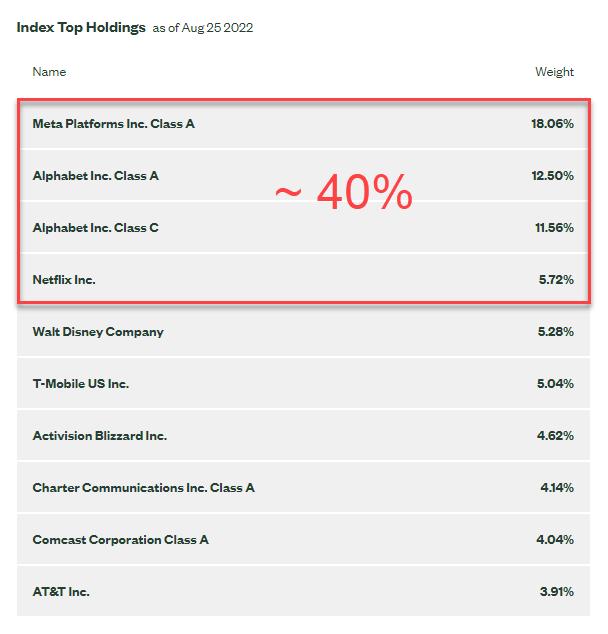 When you closely look at the position of $DJUSNS against XLC in the RRG above, you will notice that its tail is inside the improving quadrant (vs. XLC as well) and rotating back down without crossing over the (imaginary) vertical axis that represents the 100-level on the RS-Ratio scale against XLC.

It is pretty clear that, when META and GOOGL break lower, the decline in XLC will start to accelerate again. 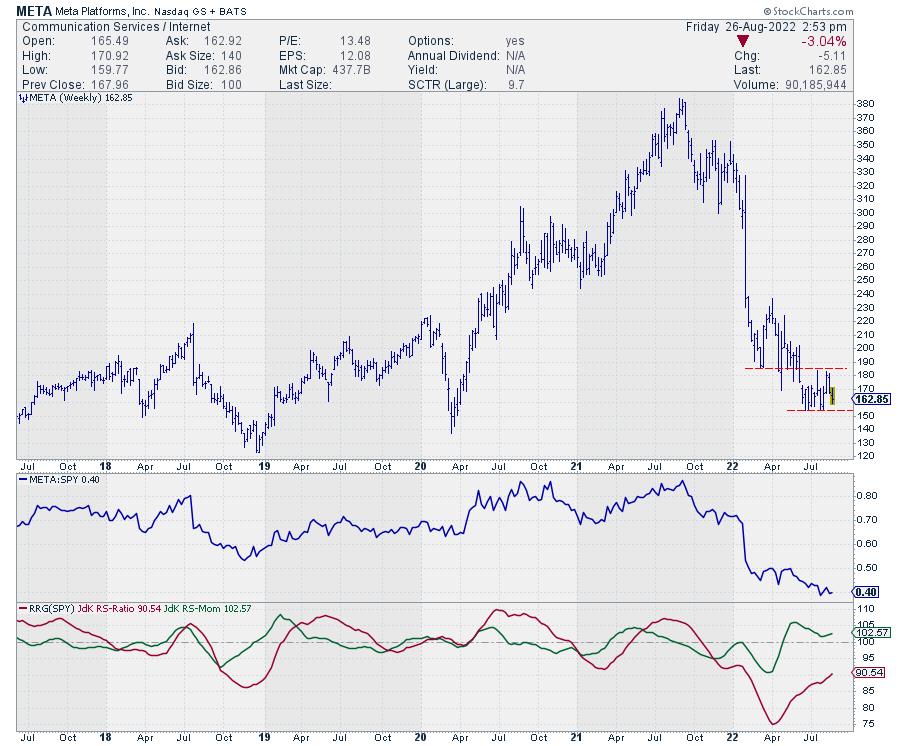 For META, the important support level to watch is around 153-154. When that breaks and META leaves the small consolidation, an acceleration lower may be expected. 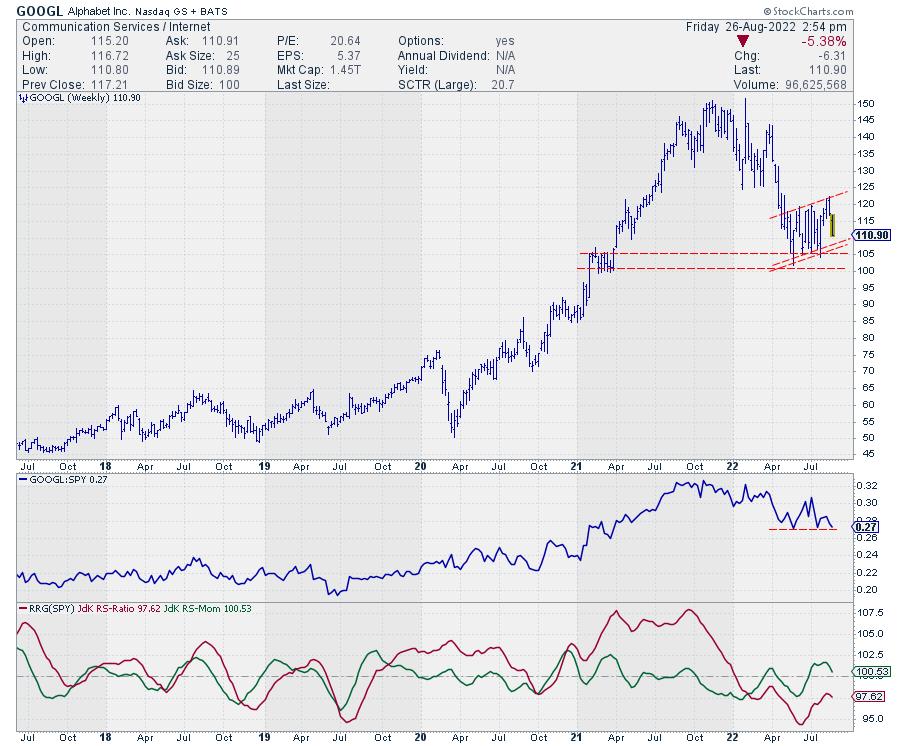 GOOGL is in a slightly rising consolidation, but is having difficulty pushing higher. There is plenty of support on the downside between 100-107.5, but ,when that area of support gives way, it will open up serious downside potential.

All in all, the outlook for this sector remains very weak, and more relative weakness seems to be underway.

#StaySafe, Have a great weekend, –Julius

Please find my handles for social media channels under the Bio below.

Feedback, comments or questions are welcome at Juliusdk@stockcharts.com. I cannot promise to respond to each and every message, but I will certainly read them and, where reasonably possible, use the feedback and comments or answer questions.

To discuss RRG with me on S.C.A.N., tag me using the handle Julius_RRG.

About the author:
Julius de Kempenaer is the creator of Relative Rotation Graphs™. This unique method to visualize relative strength within a universe of securities was first launched on Bloomberg professional services terminals in January of 2011 and was released on StockCharts.com in July of 2014.

After graduating from the Dutch Royal Military Academy, Julius served in the Dutch Air Force in multiple officer ranks. He retired from the military as a captain in 1990 to enter the financial industry as a portfolio manager for Equity & Law (now part of AXA Investment Managers).
Learn More

Dow closes down 1000 points, Nasdaq falls 3.9% after Powell warns of pain to households in inflation battle