From time to time, I compare the rotations of the SPDR sectors that we usually use with their EW counterparts. 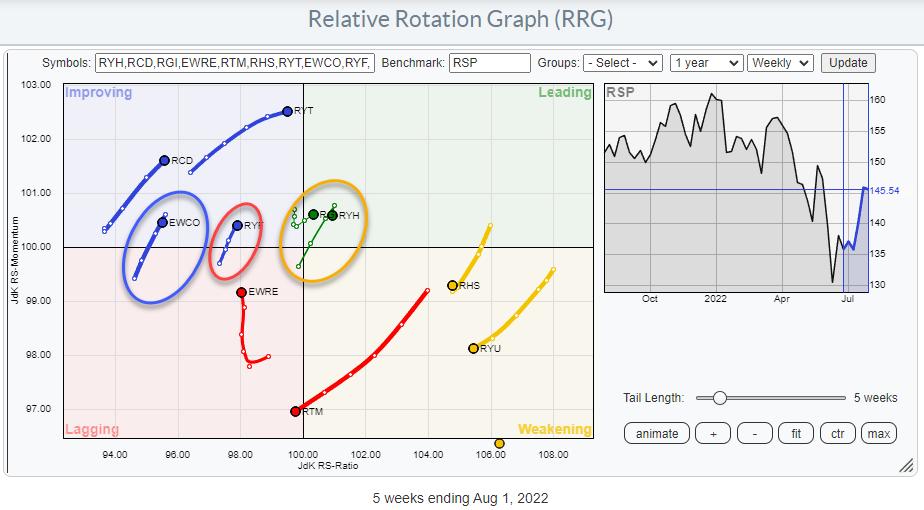 Most rotations trace out more or less the same trajectory, but, for a few sectors, there is a significant disconnect between the cap-weighted and the equal-weighted versions.

In the two RRGs above, I marked the disconnected sectors with the colors of the quadrant in “the other” RRG.

The tail for XLC is inside the improving quadrant, but rolled over a few weeks ago and is now heading down towards the lagging quadrant. Starting last week, EWCO has now also reversed its course, but XLC is clearly ahead. This suggests that one or more big names in the communication services sector are pulling XLC down.

Further inspection of the RRG that shows all members of the Communication services reveals interesting rotations for META and GOOG. They are at opposite trajectories, which is always interesting as it offers great pair trading opportunities. 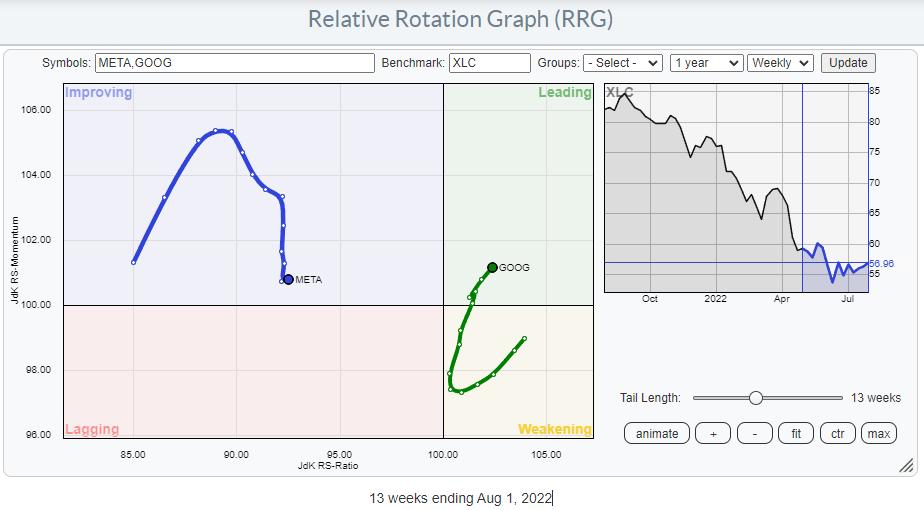 GOOG is shooting off deeper into the leading quadrant, while META is moving back towards the lagging quadrant after a stint through improving. 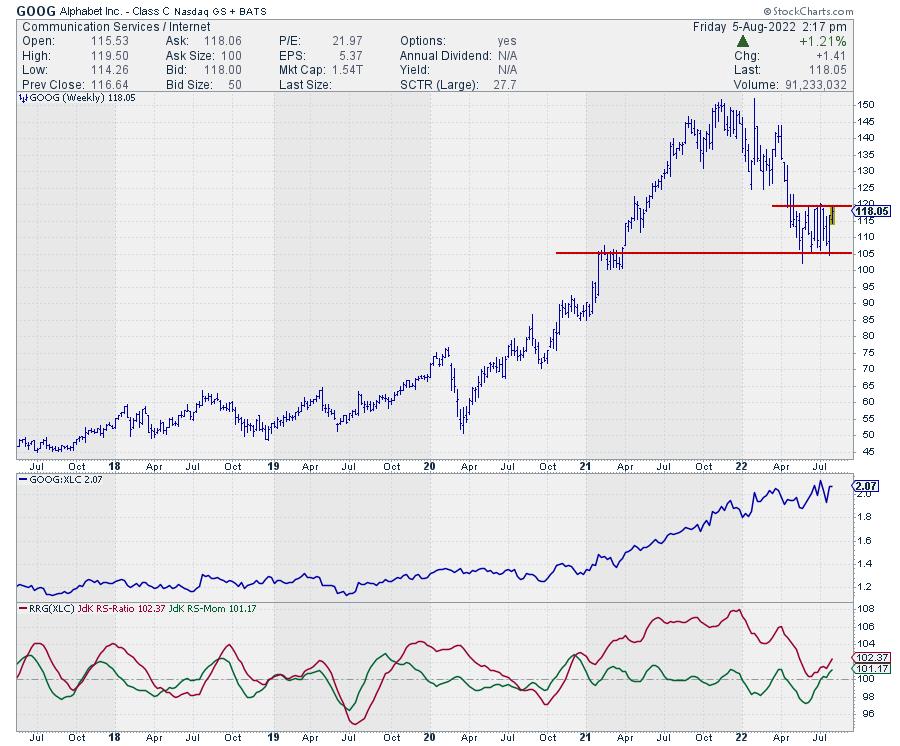 On the price chart, GOOG is pushing against the top of its trading range, which formed after the decline in the first half of the year. Notably, a break above 120 will open up fresh upside potential for GOOG, which will certainly help the rotation further into the leading quadrant.

On the cap-weighted RRG, XLF is inside the lagging quadrant and moving deeper into it. From the short tail on XLF, we can learn that it is moving at a slow rate, but the sector is weakening further. On the EW RRG, RYF is located inside the improving quadrant and moving further up at a strong RRG heading. This is a pretty serious disconnect between the two tails, which suggests that the larger names in this space are performing significantly weaker. 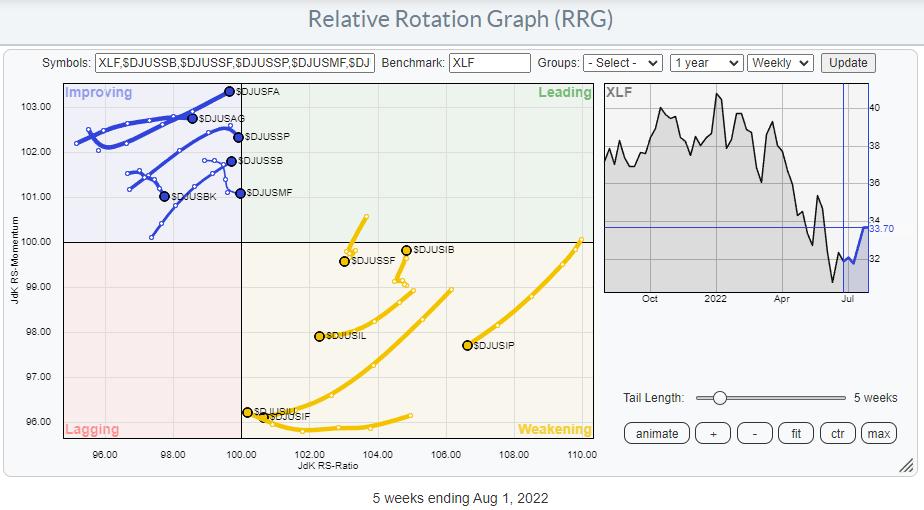 Two interesting tails for individual components are found for BLK and TRV. 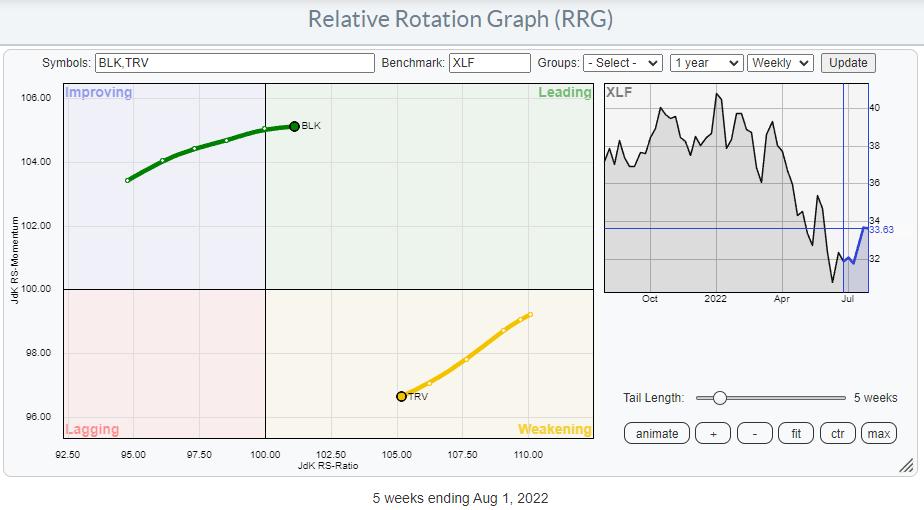 BLK has just entered the leading quadrant while TRV is inside weakening and heading towards lagging. 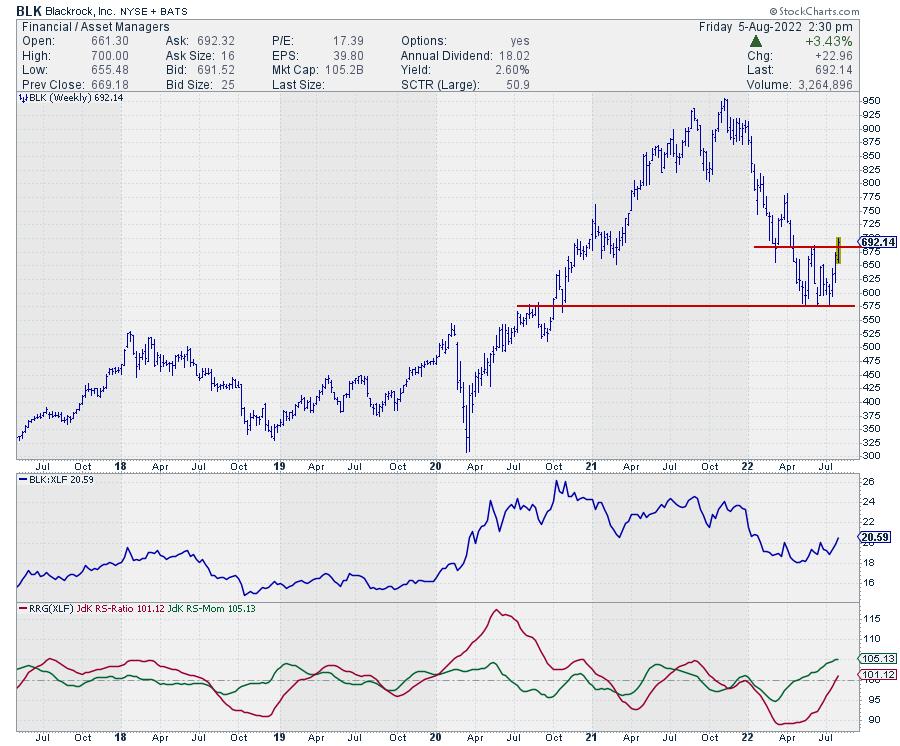 On the price chart, BLK has just completed a double bottom that was formed against a long-term support level. This upward break clears the path towards the next resistance level which is only found around 775.

So here, also, it looks as if one or more big(ger) names are pulling the sector down vs. the S&P, while the broader group is not too bad at all. 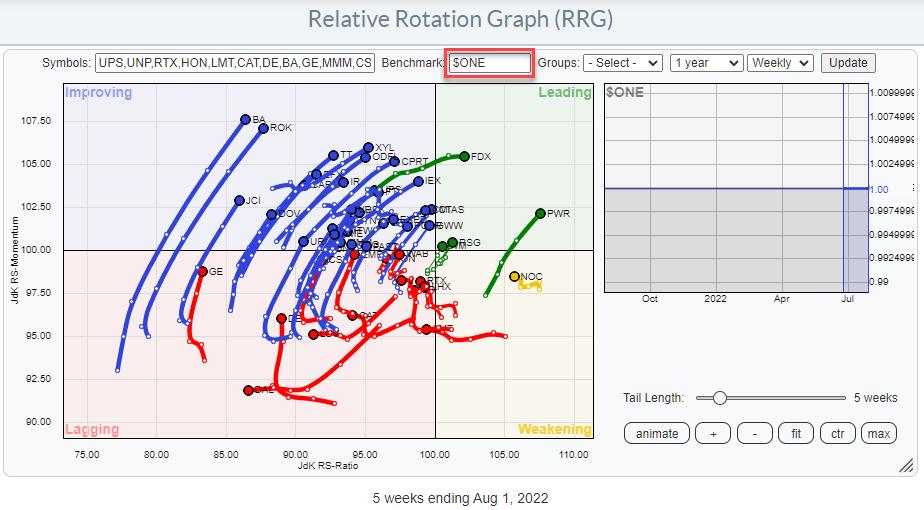 A quick check that I often use is to switch the benchmark on the RRG to $ONE. This changes the rotation to show absolute price performance instead of relative, and it can give a good handle on how the group as a whole is doing in terms of price trends. And, as you can see, the majority of tails are inside the improving quadrant and moving towards leading.

One of the stocks that really caught my eye is GWW. 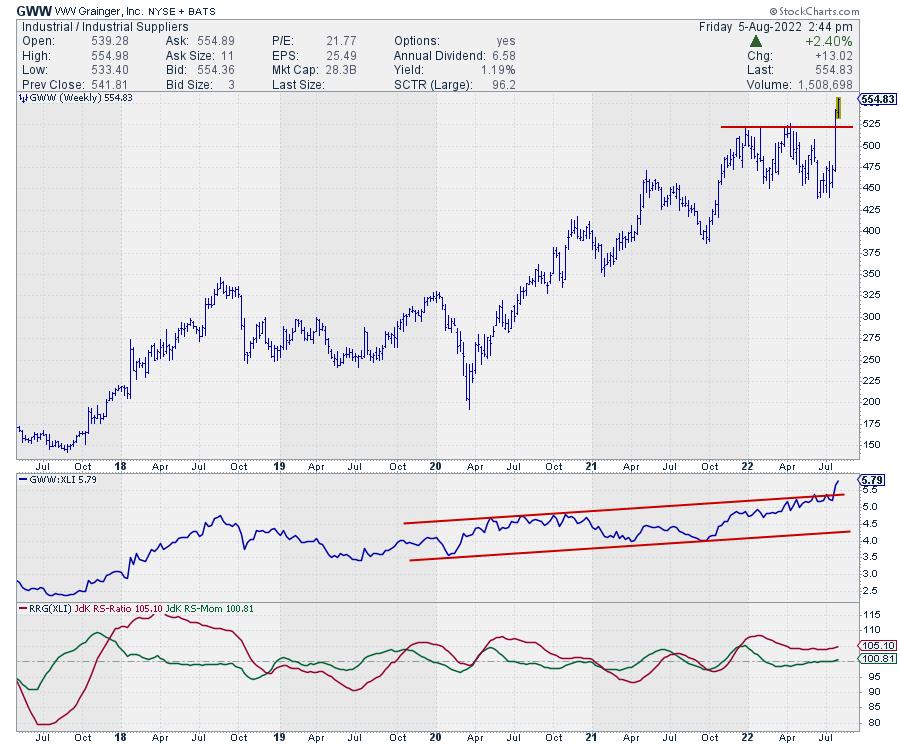 Two weeks ago, GWW broke to new all-time highs with a good follow-through last week. With the downside now well-protected at the breakout level, this creates a very good risk/reward profile. This strength in price is also causing even more improvement in relative strength, where the raw RS line is now breaking out of its already rising channel, while both RRG lines have started to move gradually higher again.

XLV, the cap-weighted SPDR ETF, rotated into the weakening quadrant two weeks ago and is now moving lower on both scales. The EW counterpart RYH is still inside the leading quadrant and started pausing its move last week. It looks a bit similar to the move we saw for Communication Services inside improving. It still suggests that, here also, the bigger names are having an impact and they are dragging the sector, XLV, lower against SPY. 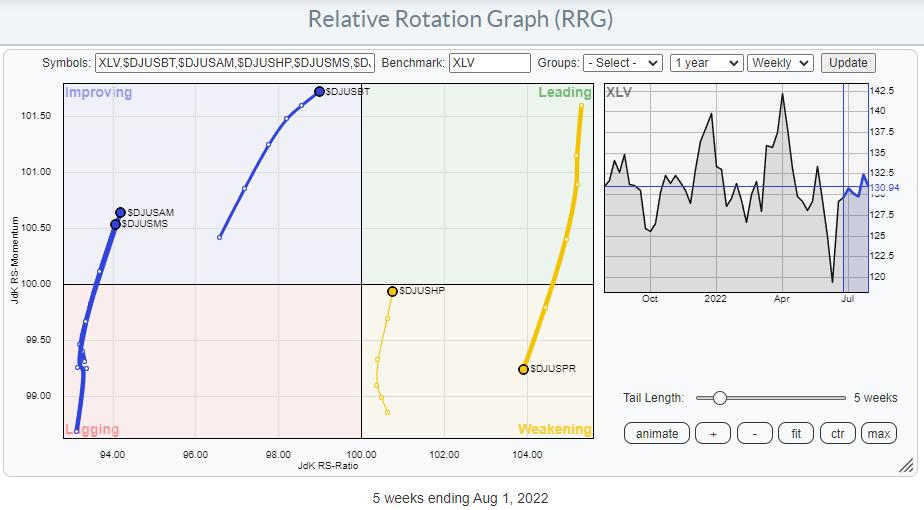 Inside the sector, there is a clear difference in rotation for the various groups. BioTech ($DJUSBT) looks really promising, together with Health Care Providers ($DJUSHP). Meanwhile Pharmaceuticals ($DJUSPR) are at an opposite rotation.

#StaySafe and have a great weekend, –Julius

Please find my handles for social media channels under the Bio below.

Feedback, comments or questions are welcome at Juliusdk@stockcharts.com. I cannot promise to respond to each and every message, but I will certainly read them and, where reasonably possible, use the feedback and comments or answer questions.

To discuss RRG with me on S.C.A.N., tag me using the handle Julius_RRG.

About the author:
Julius de Kempenaer is the creator of Relative Rotation Graphs™. This unique method to visualize relative strength within a universe of securities was first launched on Bloomberg professional services terminals in January of 2011 and was released on StockCharts.com in July of 2014.

After graduating from the Dutch Royal Military Academy, Julius served in the Dutch Air Force in multiple officer ranks. He retired from the military as a captain in 1990 to enter the financial industry as a portfolio manager for Equity & Law (now part of AXA Investment Managers).
Learn More